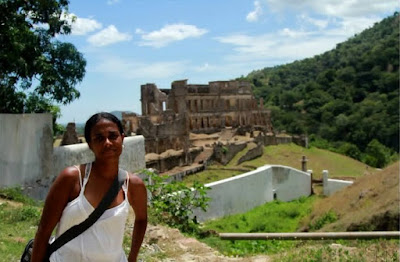 When Slayedit New York’sEditor requested my presence
at Sister’s Reel to Reel screening of La Belle Vie: The Good Life Documentary in Brooklyn last weekend, there was no hestitation.

Rachelle Salvane, the descent of 19th President of Haiti – Harlem-born, had such guts to return to Haiti, to film a documentary amidst the country’s peril.
RACHELLE SALNAVE
Rachelle’s film has been in circulation for over a couple years, but glancing at her, it looked like she was watching hernown film for the first time.
LA VIE BELLE: THE GOOD LIFE
It begins. my eyes are glued to the screen The scenes take us on a six year journey with Rachelle and her crew,
This film speaks about a wealthy and prominent family that lived in Haiti who left their prestige behind due to political instability.They left evertyhing behind.
What happens to a family and their culture when this happens? They suffered psychological, emotional and relational.
Moving to the United States and having to find their place but with an ailment of misplaced identity was there reality.

Everybody wants to belong to a land, a culture, and a people.
La Belle Vie feeds your soul on a level that takes you out of your individual bubble. La Belle Vie makes you wan to give back to the world unlike any unprecendented.
Rachelle thank you for sharing this with the world. This film has counseled me. I don’t feel as alone in my own Trinidad Diaspora.
Blessings to you and your family.
@sweet__nirja

The Winner of [Win a Date with Petrona Contest] for this week’s Charity Auction is: Rosa Farline