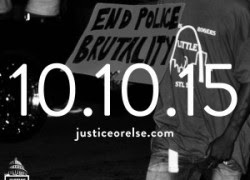 On the eve of 10.10.15, I can’t help but think of my friend, American Historian James Cool Breeze Gray who will marching in Washington tomorrow.

As he prepares his oration for tomorrow’s march, I could only imagine his thoughts and emotions.

Something spiritual and atmospheric is about to happen tomorrow. One conscious thought in a steady stream of cries will be going up to the heavens. I can already feel the earth shifting. God will not ignore. The earth, will not ignore.

On the Million March Website, Minister Louis Farrakhan invites all to march:

By The Honorable Minister Louis Farrakhan
This October will mark the 20th Anniversary of the Million Man March, which was the largest public gathering in the history of America and the largest gathering of Black men in world history. We set an example before the world on October 16, 1995 as Black men stood in ranks and a spirit of love, peace and unity was pervasive. We stood at that time for the necessity of Atonement, Reconciliation and Resposibility and in particular the need for Black men to appeal for God’s pardon for our failures to be the men that we hoped to be and ought to be. That was a magnificent and important day and appeal to the divine Supreme Being, who brought us through a time of great trouble.
Twenty-years later, however, conditions we face and rising levels of tyranny and oppression have brought us to another point in our sojourn in America. Today we suffer from an unbearable level of violence as law enforcement and Whites are able to abuse and murder us but the federal Department of Justice does little and state governments do virtually nothing. Death stalks the Black man, woman and child in America and few seem to care.

As a Black Woman living in North America, I’ve experienced my own injustice and for me, the Million Man March is symbolic to the Black Man (the crown of the Black Woman) standing up for me and my family.

Souce: Video: Justice or Else